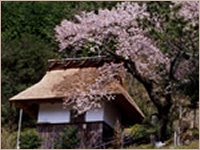 During the mid 18th century, 8 soldiers who fought to bring down the Tokugawa military leaders and return the Emperor to rule Japan, were defeated and confined in this warehouse until they died.Their last words are preserved inside. 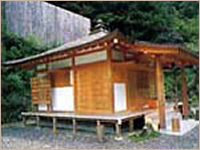 Ryujin Onsen was founded by Kobo Daishi (774-835), the founder of the Shingon school of Buddhism, who received an oracle during a dream from the Dragon King water god, which revealed the location of the hot spring waters.
Here he built a small thatched hut hermitage and enshrined a statue of Yakushi Nyorai, the medicine Buddha.Later, a monk named Myozan was miraculously cured from a skin disease after bathing here.
In gratitude he rebuilt the hut and named it Onsen-ji Temple. 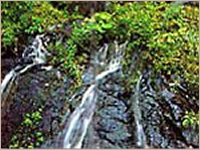 When Kobo Daishi discovered Ryujin Onsen, it is said that he named this waterfall at the same time. 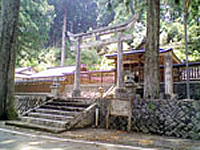 About 500 years ago this shrine was built by Masanao Ryujin, a member of a powerful family in the area.
In 1909 the Meiji government ordered the amalgamation of Shinto shrines and 16 deities became enshrined here. 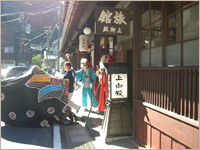 A festival held in the Kaize Shrine

This Lion dance festival visits every house in the area playing Japanese flutes and drums to get rid of evil spirits. 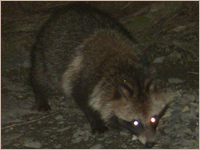 If you are lucky you might see some wildlife…